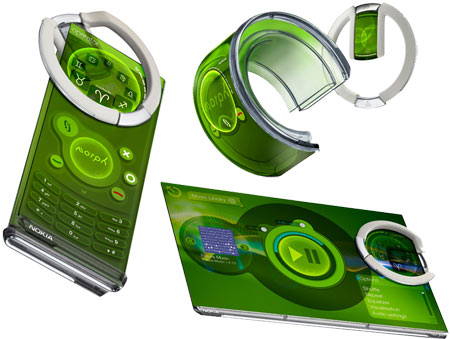 Green mobile phone concepts to communicate in a sustainable manner

Everybody possessing a mobile phone must have seen the times when the phone is out of battery and there is no way to charge it due to the absence of regular power outlet. What if the mobile phone that you have charges by itself using eco friendly measures and you never have to bother again about getting out of battery. Yes, with the help of new technologies that are emerging in this area it’s very much possible and the day is not far when such features will be available in your phone. Let’s take a look at 6 such mobile phones that accomplishes the above-mentioned task successfully and are eco friendly too.

This mobile phone, developed by ModeLabs, is in the shape of a pendant and can be worn as a regular jewelry item around the neck. The device has been so designed that from normal body movements it gets the swings and swirls and thus the energy generated is utilized to charge the phone. Not only that, this phone has the ability to get charged form solar energy too.

This concept phone from Nokia, which can take the shape of wristband, uses nanotechnology and various other proprietary techniques developed by Nokia. As per the claims made by the company, this state of art mobile phone is covered by “Nanograss” structures, which can make use of solar energy to charge the device. With the help of this new technology battery shall eventually become smaller in size and will be able to retain more charge per charging cycle.

This totally new concept is the brainchild of Tahir Cagin, a professor at A & M University. As per the research, certain materials when manufactured at nanometer level show the quality of developing charge (or energy) due to piezoelectric effect. This energy is converted into electrical form, which can in turn be used to charge the mobile phone battery.

This phone, designed by Mikhail Stawsky, is based on unique concept. This phone gets charged by just rotating it around your finger and doesn’t use any other kind of energy for charging. While you do the rotating effort, kinetic energy thus produced by your playful action gets converted to electrical energy and does the charging part.

This engineering marvel in the shape of mobile phone is powered by solar energy and charges its batteries with the help of ambient light. The phone consists of two parts, one the cell phone itself and other a wrist wrap with which you can monitor the activities taking place around you.

If you have this iPhone, you don’t need to worry about the charging part ever. The built in solar panels in this phone capture the light and convert it into electrical energy to charge the phone’s battery. Designed by Amy Lam, this phone is again an innovative device from Apple.