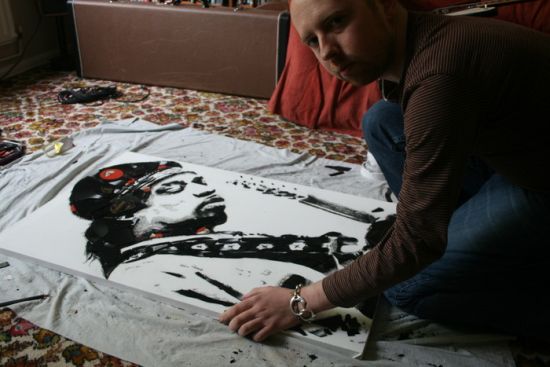 Gramophones and vinyl records may now be the things of yore; however, some restless souls cannot help but imagine the soothing music coming out of those vintage music players. Vinylitis, a project at Kickstarter, is a commendable attempt to reinstate the lost charm so that it could attain sculptural dimensions. Initiated by British artist Ben Riley, the project aims to immortalize “music icons from the past and present” on canvas made from broken vinyl pieces.

The artist plans to use old, retired vinyl records to create his 3 dimensional pieces depicting iconic music artists. The three dimensional pieces would further ensure that the viewers can see his art in more than one dimension. More literally, the vinyl pieces show how music could make the icon rather than the music icon making music. Named after random titles, each piece will have its very own, unique identity. The massive project involves sheer hardwork, precision and devotion. For creating one piece, the artist has to work for six to eight days.

Ben further aims to publicize his work, i.e. Vinylitis in London, the US and other parts of the world. With 29 days to go, Ben’s project has attracted one backer, which translates into £95.00 out of the pledged £11,000 goal.

5 Tips for Effective Environmental Friendliness in...

Rebirth magazine rack made out of discarded...

Companies that hit news for their greener...

Best ways to recycle your e-waste