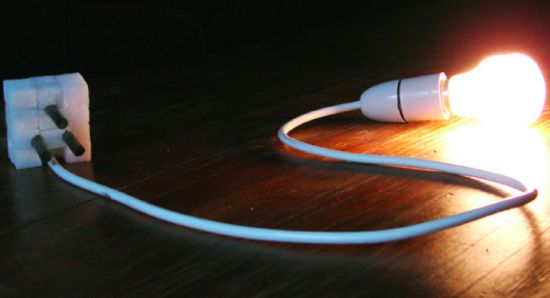 With conventional energy resources dwindling at a pace faster than expected, scientists, thinkers and commoners are forced to think about other power options. Indian-based Anab Jain is one such concerned soul who has conceived an interesting solution – conceptual energy autonomous systems that rely on simple organic compounds, such as sugar and garden sludge to produce usable electric charge.

The process, dubbed as Sugar Power or Life and Death in Energy Autonomous Devices, is facilitated by microbial fuel cells which work as sustainable energy sources. Bacteria, i.e. Rhodoferax ferrireducens, in the sludge metabolize the sugar while freed electrons collect on an electrode in a cell. The bacteria consume iron or graphite for producing metabolic energy. The energy production, thus, is directly proportional to the sugar levels and the presence of bacteria.

In the video below (after images), you can see a microbial fuel cell made of sugar and containing the sludge substrate. The object, which has a fixed life span, produces enough electric charge to help one do his daily chores before it dies out, finally.

Craft ideas made from toilet rolls for...