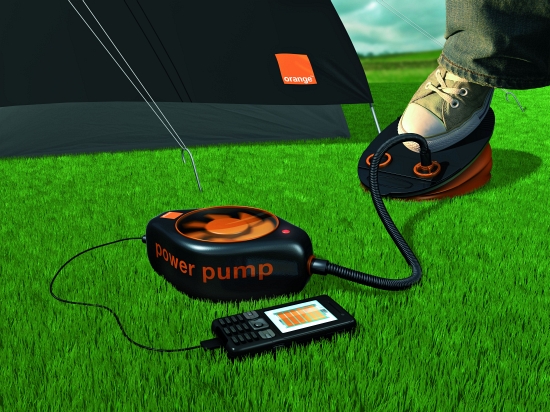 Human powered gadget chargers you need to know of

Often considered as an inefficient, energy-wasting machine, human body is quite capable of generating self-engendered kinetic energy that can be converted into electrical energy to recharge mobile devices on the move. This will lessen our dependence on traditional and alternative resources of energy, like solar power, wind power, etc. Moreover, such energy-generating capability will allow us to face tough situations (like when we don’t have a charger or an electric point around) with confidence.

Here we’ve listed certain out of the box devices that help up generate renewable kinetic energy for our mobile gadgets:

Developed by Orange and Gotwind, the foot-powered cellphone recharging device mimics a tire pump as far as its functioning is concerned. What users need to do is pump the device which directs air pressure to a small wind turbine generator. The generator, later, converts air pressure into usable, renewable electricity. As per estimates, users can get 5-minute of talktime while pumping the device for one minute.

The brainchild of designer Satoshi Yanagisawa, Cyclus recharger is a light bulb-shaped charger that promises to produce enough charge to help you run your iPod for some hours. The spring-driven device requires users to twist the top of the bulb in a circular motion after they have plugged in their gadget that needs instant recharge. Once twisted, the device generates 30 minutes of charging power.

Designed by Jooyong Kin and Sungkyung Kim, the Jump Rope is powered by human motion. What a user needs to do is unscrew the caps off the jump rope’s handles, slot in rechargeable batteries and re-cap the handles. Now, when the user jumps, the rope generates enough power to charge batteries. Moreover, a display is there to notify you about rope revolutions, the charge generated and amount of calories burned.

Launched by Easy Energy, YoGen is a portable, pocket-sized charger that relies on human action to generate clean recharge for mobile devices. The $40 human-powered device has a ripcord that needs to be pulled repeatedly to send charge to an internal alternator, which allows users to charge their devices on the move.

How to make diesel from cooking oil

Simple tips to increase the reliability of...

Go green this Christmas with a fireplace...