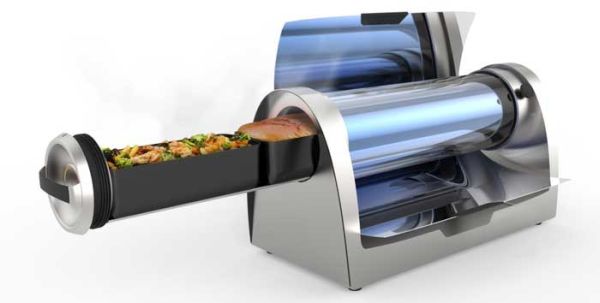 GoSun Grill solar oven has no problems cooking at night

Many regard a vacation as incomplete if there is no cooking on the grill, it is fun to cook in the outdoors. What if you lie on the hammock and your food grills on its own that too without smoke? The innovation GoSun grill cooks without fuel even at night!

A fuel-free cooker powered by the Sun 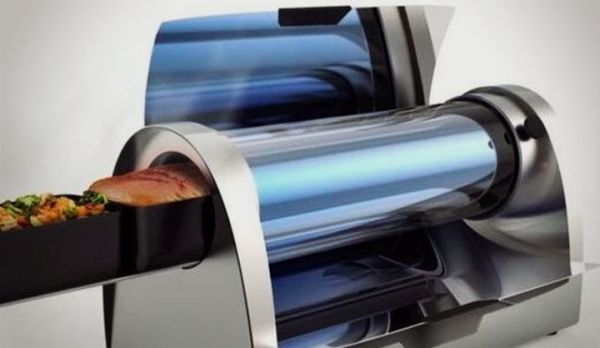 The GoSun grill uses the sun’s power to cook for you, the solar powered grill cooks for eight people in a go. The method used to cook is extremely simple you just need to fill the tray and open up the reflectors, the GoSun grill will do rest.

It is better than a conventional grill as it roasts, bakes, steams and boils the food. The cooking is uniform as the food is cooked from 360°s.The grill is portable and is ready for any outdoor journey with ease, can be used in the kitchen at home too.

Since there is no fuel used in cooking, you become free from carrying any fuel along with the Grill. There is no mess to clean, no charcoal or wood is used for cooking and hence no soot formation occurs. The grill uses a phase change thermal battery to store the energy from the sun and can cook at night. The manufacturer of the appliance claims that it cooks faster than the conventional grill.

There are several advantages of using the GoSun grill over the conventional grill. Firstly, all grills get too hot and an accidental touch on the body can cause injuries. On the other hand, the GoSun is not at all hot on the external surface. It is money saving as it requires no fuel, the Sun is present everywhere to power the thermal batteries. Natural gas or coal is required to be carried along with the conventional grill and of course, every refill costs money. Greasy residue, soot, smoke is produced and it is time consuming to clean, none of this occurs in the solar grill.

The temperature gauge on the outer body displays the temperature leaving no room for approximation. On the inside, the solar grill has a borosilicate glass vacuum tube, which helps, in uniform cooking of food and helps retain heat inside.

The heart of the system: The Thermal Battery 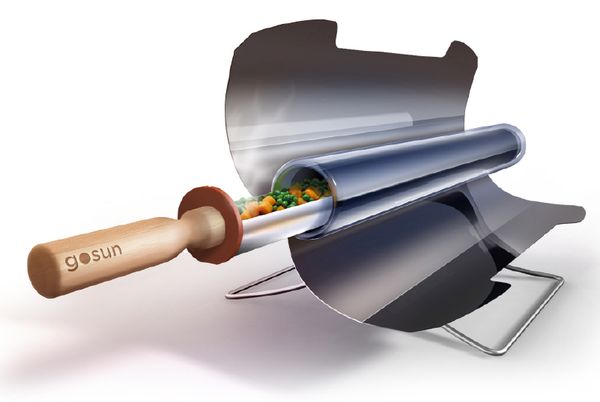 Although the patent of the battery is pending, it has a cutting-edge technology. The sun gives us energy free of cost, but it isn’t there all the time. The clouds, rain or at night are a spoilsport for solar cooking. That is the reason the phase changing thermal battery was invented. The battery is made up of non-toxic organic wax, inside an aluminum casing. The thermal battery charges in two hours and retains heat for a couple of hours.

The reflectors on the grill receive the sun’s energy, the battery is initially kept on top of the cooking pans. When the battery is preheated, which is after two hours in the sun, the tray is opened and the pans are kept on the battery. The meal cooks inside the Vacuum glass chamber, which is highly temperature resistant. The food cooks at steady temperatures between 300-400°F.

The optional stand of the GoSun grill is made of 100% stainless steel. It has space to prepare food and hang utensils. The grill fits perfectly on it and the table has wheels on it to move it around.

Being able to cook food at night and that too without using any fuel is quite an adventure. The GoSun grill is a perfect companion for you trips, you also do your bit for the environment as there is no pollution caused. Using the renewable energy source is a smart choice as it saves you money as well.