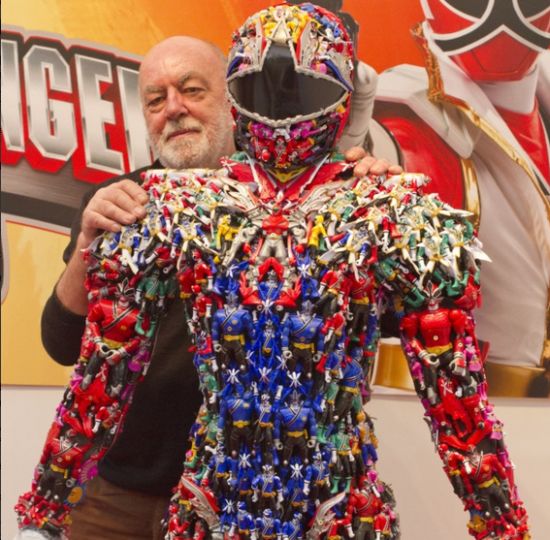 British eco artist Robert Bradford has just recently created a six-foot Power Ranger sculpture. Unveiled at a Toy Fair in London, the life-sized sculpture is made by gluing and screwing more than 650 individual power rangers together, which now stands proud on a wooden structure. Bradford created the toy sculpture to commemorate 20th anniversary of Power Rangers toys.

Bradford was commissioned by Bandai Toys to create the toy sculpture. He spent over 200 hours to bring his eco creation to existence. Made from second hand toys picked up from various sales, the toy sculpture speaks volumes about artist’s unique art. It further goes on to honor Israeli-American media mogul Haim Saban’s Mighty Morphin Power Rangers – a television show running successfully since 1993.

The Herne Bay sculptor rejects the idea of playing around with toys as something reserved for kids only. Through his impeccable art, he not only allows discarded toys to get a fresh lease of life, but also elevates them to sculptural heights.

Capolinea Design’s Tonda armchair is made from...