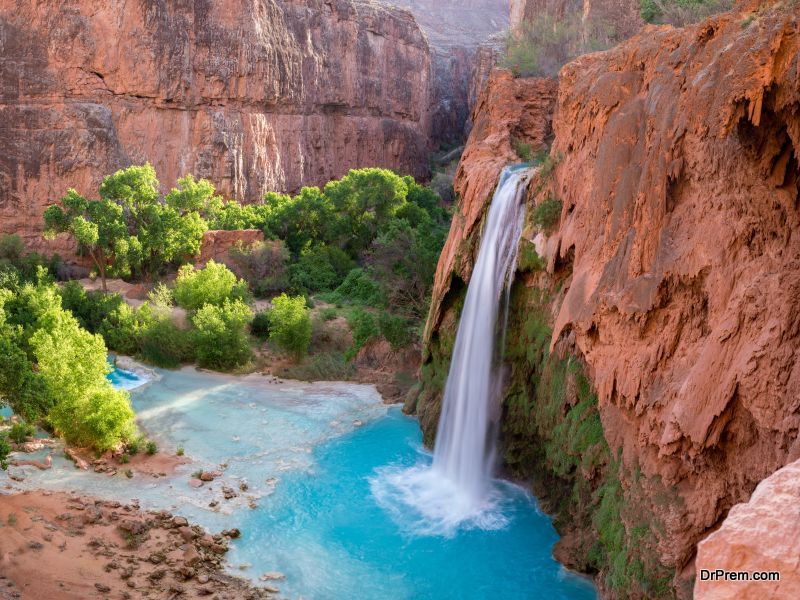 15 Greatest Waterfalls of the World

A waterfall is truly a natural wonder that is worth visiting at least once in your life. While there are hundreds if not thousands of waterfalls around the earth, some that do not fail to make a mark when it comes to standing out with their sheer beauty and magnificence. Here are 15 such waterfalls from around the world that give a whole new meaning to the word ‘majestic’. 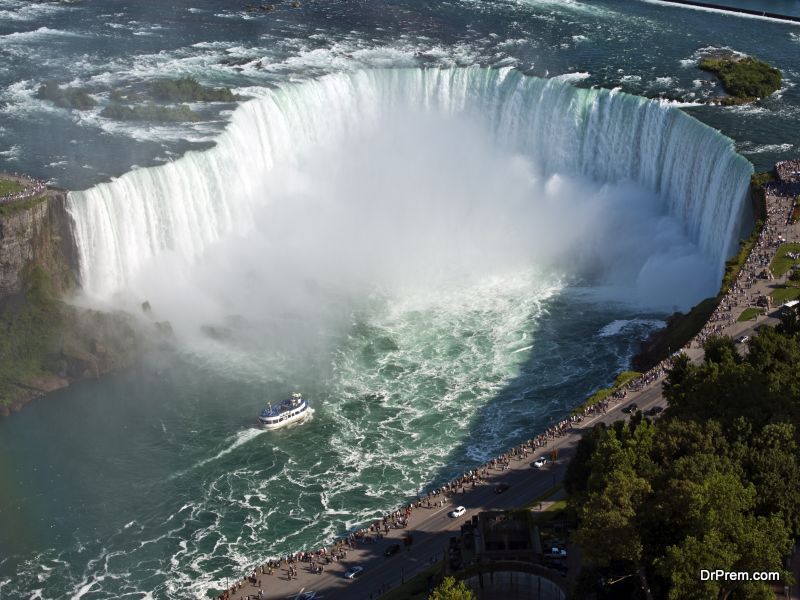 Let’s start with the granddaddy of them all, the Niagara Falls which is the largest and most majestic falls on earth. Situated on the international border between Canada and the U.S.A, the Niagara Falls is made up of three falls, the American Falls, Bridal Veil Falls and the Horseshoe Falls. It is the most visited waterfall on earth as well.

Deemed to be one of Asia’s largest waterfalls, the Huangguoshu Falls is a part of 18 individual waterfalls that come together to cascade off a 134-meter high cliff. The highlight of the falls is the cave behind it which allows visitors to catch close glimpses of the waterfall and even touch it.

Located in the Kaieteur National Park, the Kaieteur Falls is one of the most powerful waterfalls on earth. It stands taller than the Niagara Falls by nearly 5 times and twice as high as the Victoria Falls. The combination of water volume and height make the Kaieteur Falls a force to reckon with. 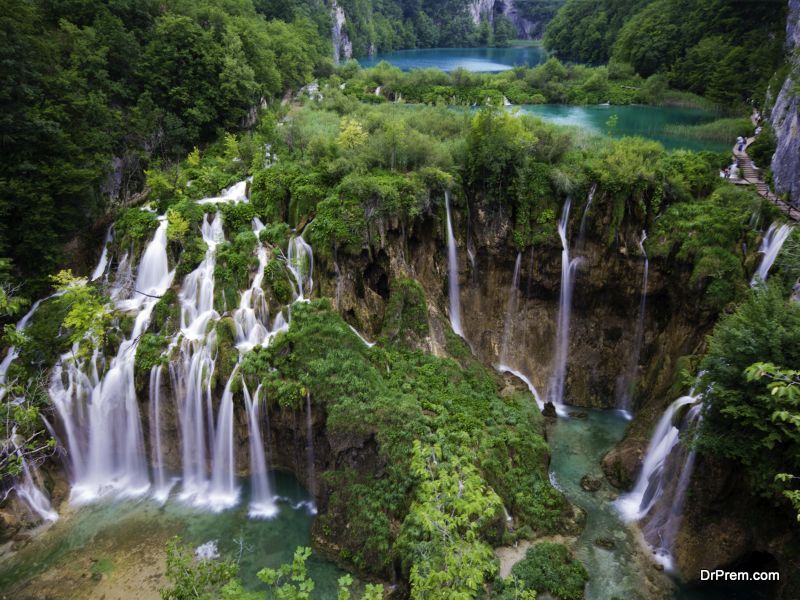 Located in the Plitvice Lakes National Park, the Plitvice Waterfalls boasts of being the most beautiful and colorful waterfall on earth. The waterfall is a part of a 16 lake system, with the water cascading mesmerizingly through chalk and limestone formations, into naturally formed dams in shades of turquoise and emerald.

Located near the city of Chachapovas, the Gocta Cataracts is a very popular tourist attraction among locals and tourists alike. Considered as one of the tallest waterfalls in the country, it is surrounded by easily accessible trails that offer marvelous views of the cataract.

Considered as one of the most powerful waterfalls in Europe, the Detifoss Falls is situated in Vatnajokull National Park. Fed by the Jokulsa a Fjollum River from which it can be viewed as well, the falls cascade into a deep canyon, with the east bank offering the best views and facilities for tourists. 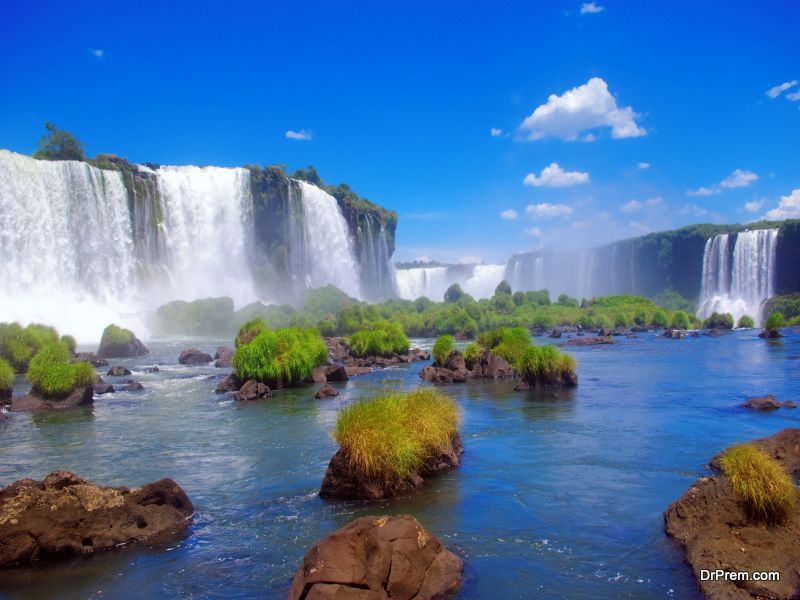 The Iguazu Falls is an astounding falls that is actually made up of 275 individual waterfalls at frequent intervals along the Iguazu River. Stretching for over two miles, the falls is often compared to the Niagara Falls. The first sight of all the 275 waterfalls cascading down a ravine is sure to leave you breathless.

Also called the Mosi-oa-Tunya in the local language, which translates to ‘Smoke that Thunders’, the Victoria Falls in Zimbabwe gives stiff competition to the Niagara in terms of size. The roaring sound of the falls as well as the mist can be heard and seen from miles away.

As part of the Killarney National Park, the Torc Waterfall is a striking waterfall that enjoys fairy tale like surroundings which give it a mystical feel. Situated at a height of 80 feet, the falls as well the viewpoints straddling it at regular intervals offer spectacular views of the surroundings.

Located in the Grand Canyon in Colorado, the Havasu Falls is the most photographed falls in the region. This can be attributed to the crystal clear water that plunges down a fiery red rock tower into a contrastingly turquoise pool below. The roar of the falls echoes off the rock walls to be heard from over half a mile away.

Located in the McArthur Burney Fall Memorial State Park, California, the Burney Falls finds its source in an underground spring situated at a height of 129 feet. Unlike many other falls that dry up during the summer months, the Burney Falls experiences an uninterrupted flow of almost 100 million gallons of water everyday throughout the year.

As part of the Yosemite National Park, the Yosemite Falls is the highest waterfall in North America. Measuring a staggering height of 2425 feet from the top to the base, the falls experiences a peak flow in May and is a tourist hotspot in the park. 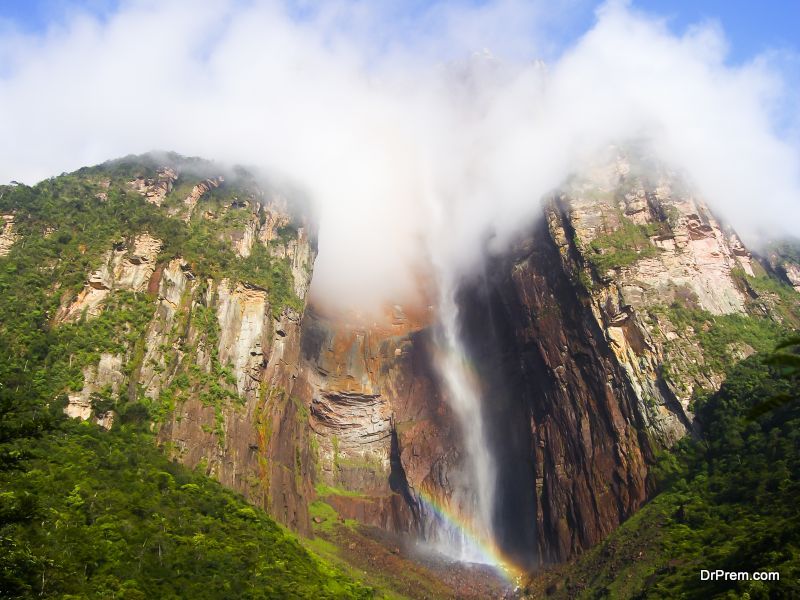 Deemed as the tallest uninterrupted waterfall in the world, the Angel Falls has water cascading against a steep rock for almost 3212 feet, with the single longest drop being measured at 2648 feet. Situated deep inside the rainforest, the falls reveals itself to a lucky few on a particularly clear day.

At a height of 829 feet, the Jog Falls is India’s highest waterfalls. While it has little to no water during the summer months, the monsoon season brings it to life with the Sharavathi River feeding it large volumes of water which create a thunderous spectacle as they cascade over the cliff edge.

Also called ‘Golden Falls’, the Gullfoss Falls is located on the Hyita River. Boasting of a 105 foot double drop, the falls is best visited in summer.

Waterfalls are truly natural wonders that can leave you enthralled. Of all the waterfalls in the world, these are the most beautiful and majestic ones that will spellbind you for sure.

How to Make Your Kitchen More Eco-Friendly

How to Effectively Ensure Clean and Safe Environment

What All You Can Expect from a Green...

Consumers Are Seeing More Eco-Friendly Options than Ever...